Deoxyribonucleic acid (DNA) and ribonucleic acid (RNA)
DNA and RNA are nucleic acids, made from monomers (nucleotides) with three key components: a sugar (deoxyribose for DNA and ribose for RNA), a phosphate group, and a nitrogenous base (adenine, cytosine, guanine and thymine/uracil). DNA is the hereditary material in all forms of life, including humans. It carries genetic instructions used for growth, development and reproduction. RNA is a molecule essential to various functions of living organisms. Specifically, it is responsible for decoding, and regulating the expression of genes, including the creation of proteins.

In terms of representing sequences, DNA’s nucleotide sequences are represented by: adenine (A), cytosine (C), guanine (G), and thymine (T).

Proteins
Proteins are made up of amino acids which are organic compounds containing amine and carboxyl functional groups. Proteins carry out various, essential functions within the human body from structural cell support to enzymatic activity. They are formed when DNA goes through the process of transcription to form a messenger ribonucleic acid (mRNA) and this mRNA is then translated to synthesize proteins.

Amino acid sequences are represented by either the name, three letter or one letter codes of the amino acids which they are composed from e.g. Lysine is represented as “Lys” or “K”.

Motifs
Motifs are short sequences patterns that represent fundamental units of biological function, and they encode protein, DNA, and RNA interactions, as well as catalytic functions. These motifs can be found in both the coding and non-coding parts of the genome. Such motifs allow for the identification of genes that contribute to specific functions of an organism.

Descriptions of Motifs Analyzed
PITX1 (Paired Like Homeodomain 1) Motif
The PITX1 motif is part of the PITX protein family. This family is involved in organ development and left-right asymmetry. The sequence obtained for analysis was from the embryonic hind-limbs of a mouse, at an estimated 11.5 days of development. It is also thought to play a role in the development of anterior structures, specifically the brain and facial characteristics. PITX1 is also heavily involved in limb development. Defects in PITX1 can cause congenital clubfoot (foot abnormalities caused at birth) e.g. a twisted foot similar to the image shown below: 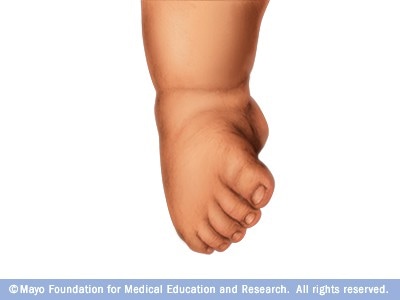 Generally, clubfoot is treatable if diagnosed early on. “GGATTA” is a very prominent binding motif for PITX1.

C-jun Motif
C-jun is a transcription factor that plays an important role in cell development, growth and differentiation. However, its binding sites and target genes are not clearly defined. C-jun interacts directly with specific target DNA sequences to regulate gene expression.

RUNX3 Motif
Runt-related transcription factor 3 is a protein that is coded by the RUNX3 gene. Specifically, those used in this project were taken from the GM12878 cell line which contains B-lymphocytes (white blood cells) infected with Epstein-Barr virus to achieve immortality (used to induce the expression of the RUNX3 transcription factor). 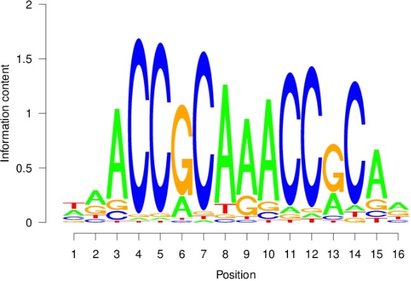 Stat1 Motif
The Stat1 transcription factor is essential to the cell cycle, especially during the cell transcription process in interphase, since it acts as a transcriptional activator in response to cytokines or growth factors.
NANOG Motif
NANOG is a transcription regulator involved in embryonic stem cell proliferation (differentiation) and self-renewal, allowing for pluripotency. It is also involved in controlling inner cell mass.
E-box Motif
An E-box (enhancer box) is a DNA response element found in eukaryotes that acts as a protein-binding site. It is a basic helix-loop-helix (bHLH) in structure (characterized by two α-helices connected by a loop). It has been found to regulate gene expression in neurons, muscles, and other tissues. Its specific DNA sequence is: CANNTG (where N is any nucleotide). In this project, its prominent “CAGCTG” DNA sequence was analyzed (its other major variant is “CACGTG”). 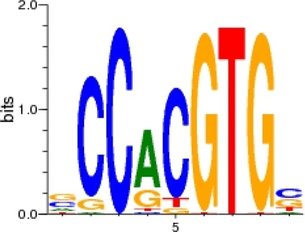 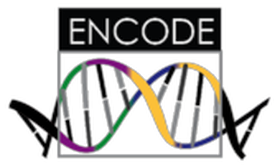 ENCODE Project
The Encyclopedia of DNA Elements (ENCODE) is a public research project which aims to find all functional elements in the human genome. It was initially launched by the US National Human Genome Research Institute (NHGRI) in September 2003. It involves a collaboration of worldwide research groups and its data can be accessed through public databases. Many of the sequences used for this project’s testing were obtained from the ENCODE project e.g. sequences from embryonic stem cells containing the NANOG motif.
DNA Sequencing Process
With regards to antibody pulldown and DNA shearing, researchers first cross-link cell contents with formaldehyde which 'freezes' everything (proteins) in place. They then take the cell suspension and sonicate it (blasting it with sonic waves from a specialized speaker); altering the frequency of the sonication allows researchers to get fragments of DNA of approximately equal length that they want. Researchers then coat a column full of beads with antibodies which will bind the PITX1 protein (for example), so when they pour the DNA fragments through the column any fragments which have PITX1 bound to them will get trapped. They then wash this trapped DNA off and sequence it, and that's basically ChIP-seq data, which is used in the project.
MEME (Multiple EM for Motif Elicitation) Algorithm
Essentially, MEME uses the expectation maximization algorithm to discover the most statistically overrepresented probabilistic motif in a set of sequences. It starts on a random position, updates its weights (nucleotide probabilities) based on that and scans again, and repeats until it converges on a single motif.


In the case of the first trial's question, intuitively one would think B generated it since the proportion of heads matches B's bias very well... but that value was just a guess, so one cannot be sure.
Simple explanation of EM algorithm:
Powered by